From Helsinki to Turku in a 50-year old motor boat 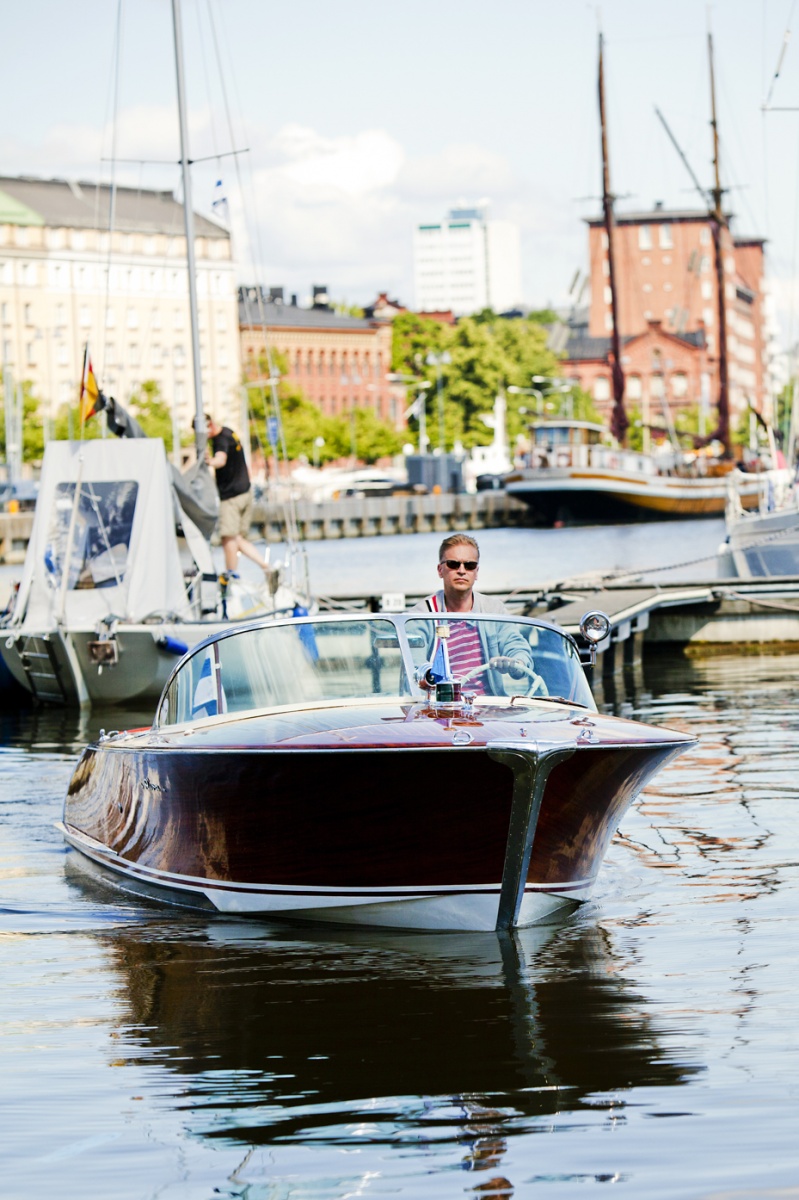 After having owned the 1964 Riva Super Florida for about a year I started to think about a longer trip in the Finnish archipelago. It became rather obsessive and in the early summer of 2012 there was no turning back. When my summer vacation started in the beginning of July I notified my wife and daughter that dad has to do what he has to do and take a few days of his own quality time.

I decided that my journey would be from Helsinki to Turku, slightly over 200 nautical miles, with one overnight stop. Most of the route is protected between islands, but there are a few sections that are open to the sea, and they can be really rough depending on the direction and strentgh of the wind.

I bought the necessary sea charts, a small quality compass and updated the Navionics software on my iPhone. It is a very good quality software that is very useful when used together with traditional navigation (with a tablet computer even better). The route was carefully planned with my neighbour who is an experienced sailor and former sea captain. I also had a friend of mine on standby with my classic Range Rover and trailer, in case there would be any problems and he would have to collect me somewhere along the coast. He would in any case pick me and the boat up from Turku after a few days.

I timed the departure according to the weather forecast, and Tuesday morning 3.July seemed liked the best opportunity, even though the wind was occasionally from southwest, the worst possible direction in the open water areas after Porkkala. I filled the 130 litre tank at 10 am at the Puotila guest harbour in Eastern Helsinki on that morning, and was on my way.

I cruised the protected routes, mainly very slowly, enjoying the weather and beautiful scenery. Most of the routes were completely new to me.

The sea was pretty rough as expected after I had reached the Porkkala peninsula turning northwest. Gladly I caught a large stealth-like modern missile cruiser of the Finnish Navy, and stayed on it’s calm wake. In the middle of the open water it made a sharp starboard turn towards the Upinniemi naval base, and for a while I was again at the mercy of the waves.

This turned out to be the most challenging (= wet) part of the journey. The Super Florida, like all Rivas, has a very well-designed hull, but it is still a small boat and the waves of the Baltic Sea are pretty short making it hard to maintain a decent speed. For me, this is more of an attitude question; nobody complains about getting wet when riding a motorcycle, so why should you always stay dry in a runabout? Besides some hurting in my tailbone – my Riva Club Sweden baseball cap was the only real casualty, when it flew overboard I didn’t even think about going back and try to fish it from the waves.

After clearing the open waters, the journey continued through the Bärosund straight towards Hanko, where I had made a reservation in the brand new Hotel Regatta. When I was passing the straight leading north to Tammisaari I started to doubt my fuel situation and decided to make a detour north. In the Tammisaari guest harbour I used about half an hour filling up the tank and a late lunch at four o’clock in the afternoon. I managed to fit 82,41 litres in the tank, meaning that the consumption was 13.7 litres per hour.

I reached Hanko at about 6 pm, and negotiated a handy side mooring place with the harbour captain. The spot was filled with summer vacationists, and when placing the mooring cover, there
were a lot of friendly people inquiring about the boat and whether it was some new retro style runabout. It was hard for most people to understand that I was navigating a 50 year-old motorboat, but I don’t mind telling the same stories again when the audience is always with a positive attitude.
It was a short walking distance to the hotel – and a cold beer. A nice dinner in one of the many summer restaurants of the harbour of the southernmost mainland town of Finland ended this fantastic day.

After a good night’s sleep I filled up the tank once more and headed towards the Turku archipelago. The weather was even better, 23-25 degrees and the open waters of Hanko did not give any problems because of the calm winds which were also blowing from another direction by now, so I was able to maintain a high speed until Kasnäs, where I stopped for an ice cream.

When visiting the Nauvo guest harbour I noticed a very stately mahogany ”salongbåt” in the style of a Swedish Pettersson. From Nauvo I headed to close by Innamo, my father’s summer home and made a brief visit there before the last leg of my journey to Turku. When coming to the last larger open water area of Airisto I had to accelerate to make it in front of the large Silja Europa car ferry, just avoiding getting in it’s waves. Finally reached Turku harbour at eight in the evening, tired but happy. A fantastic journey altogether – and very possibly a once in a lifetime experience!

– article published in Finnish in Puuvene -magazine and in English and Italian in Riva Historical Society’s international VivaRiva magazine.